We have now registered our interest in adopting kittens with our local cat charity (tvaw). Apparently early summer is the normal time for them to be available.

My Abbey Girls collection is one delivery away from complete!
After buying a first edition of "Rosamund's Castle" last weekend for an eye-watering sum, I was inspired to check online for "A Fiddler for the Abbey" the only title I am missing from the main series.

Those lovely people at GGB have reprinted it, and a shiny new copy is on its way to me for a mere £15.

I have just re-read "Maidlin bears the torch" so I could get back up to speed with where "Rosamund's Castle" fits in.

Why has nobody noticed that Joy is a monster?

A small piece of good news - I have put myself forward as a judge for the 500 words competition again.

What glimmer of cheer can you offer in these dark days?

I have been delivering a very heavy training schedule over the last 2 weeks and my last sessions are Tuesday.
It's over webex and has been up to four hours per day (I made sure no one day had any more than that). On Wednesday I started coming down with a cold, so on Thursday I worked from home and tried not to speak more than necessary. On Friday, I was able to have a 3 hour lie-in because I would be training into the evening. This helped, but my voice wore away to a thread by the end of the last session.

So now I'm rationing myself to 3 sentences a day apart from the training sessions.
I am hoping that way that I won't have to act out the above.

bookzombie knows me well enough to interpret most of my miming.

Oh plus I am resting as much as possible to get rid of the cold.

Where is the sensible secure place I put my security pass before working from home for a week?
I moved it out of the holder in my car so it wouldn't be visible.

Go on, which one of you sneaked into the house and moved it somewhere even more secure?

I have accidentally followed

bookzombie into podcasting.
The first episode is now available here https://itun.es/gb/1-Gshb.c
He is in the first adventure (probably first three episodes) and we are both in the next adventure.

Go have a listen and let us know what you think.

I have 2 resolutions
1) To read the whole of "War and Peace" by reading a chapter every time I do some reading - and reading whatever else I like at the same time.
2) To become more active by
a) checking my fitbit shortly before bed and doing 100 extra steps on those days when I am under 10,000 steps (likely to be most of them)
b) start running again 1st March or earlier if it is consistently not damp.

Other than that, just general good intentions.

Walked along the prom
Cuddled a donkey on the beach - and been leaned on in return
Danced a rhumba on the floor of the Tower Ballroom - by copying the couple next to us
Laughed and groaned at the jokes on the comedy pavement
Had fish'n'chips at Harry Ramsden's
Gambled away our tuppences in Coral Island - and donated our winning tickets to people who were collecting them
Bought rock and candy floss
Watched Strictly with a take-away and some Cava
Drunk innumerable cups of tea and talked for hours.
Looked at all the tableaux illuminations with a very excited six-year old.

Oh and in case you are wondering, that tower in France that looks like the Blackpool tower?
It is the Trifle Tower. 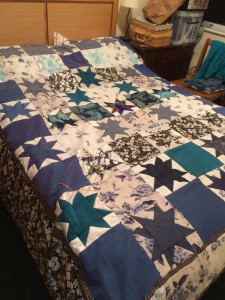 Today I finished my hand-made quilt.
It has taken me at least 5 years and every stitch was hand-sown.
Now it has pride of place, covering the double bed in the spare room.

Of course, it may be a little too fragile to let anyone actually sit on it or sleep under it, but it looks fantastic.

What achievement are you proud of this weekend?
Collapse